May 27, 2018 at 11:22 am, 2 comments
After months and months of training and preparing for my first and shortly after second marathon, I've learned a lot. Most importantly, I did it & I loved it. Was it challenging? Absolutely. 26.2 miles will test the limits of your mental and physical capabilities in ways that you can only fully appreciate once it is over. Everyone thought I was crazy for doing two marathons so close together, but I just said this the other day, I fully believe in Lynn's approach on this. The first race was my "training run" and the second race was the real race!
My first marathon was in Big Sur, CA on April 29. Prior to that race 20 miles was my longest distance. Just like I had before my first half marathon, I ended up with a case of tendinitis in my right knee. This forced me to taper a few weeks ahead of schedule, but I needed to take it easy so I could ensure I'd at least by able to run the full race. Thankfully by race day I was feeling much better and did not need the brace I had been wearing.
I had signed up for Big Sur in April of 2017, so I had a long time prior to study the course and become familiarized with what I needed to do from a training perspective, but as I've learned over the years, there is no substitute for actually running the course. The elevation maps never give an accurate depiction of what you can expect to encounter on the course. Case in point, Hurricane Point. This was definitely called out as the big uphill of the course (500ft+ elevation gain), but it's grossly understated. If someone would have told me to prepare for 2 miles of uphill (miles 10-12), starting the ascent at literally the lowest point of the course to the highest I would have done much more rigorous hill training. No one said anything about the Carmel Highlands, miles 22-24, until I was at the race expo. This final stretch of the race included cambered roads that were also rolling hills. These sections really hit me hard mentally and physically.
Despite these challenging parts of the race, the views I saw more than made up for any disappointment I had with those other sections. I was last in Big Sur 10 years earlier and absolutely fell in love with it, so to be back and running through it was beyond anything I could ever put into words. It's the kind of beauty that can bring tears to your eyes because you can't comprehend any other way to react. From the Redwood forests, to the endless deep clear blue ocean waves crashing along the shore, it was sheer bliss to drink it all in over the 5 and a half hours it took me to complete the course.
I felt very grateful for having had the opportunity to participate in this race with Runner's World through their VIP program. I found out the day before the race, this was the last year they were offering the program and that made it even more special. It was well worth the extra money paid to be a VIP. We got custom Asic's backpacks with our names on them, heated buses to the start, our own heated start tent with food and dedicated bathrooms and a dedicated finisher's tent that included a reserved set of massage therapists. In a large race like Big Sur, hands down this was worth every penny. I do hope that Big Sur or Runner's World will offer this again in the future for other races. 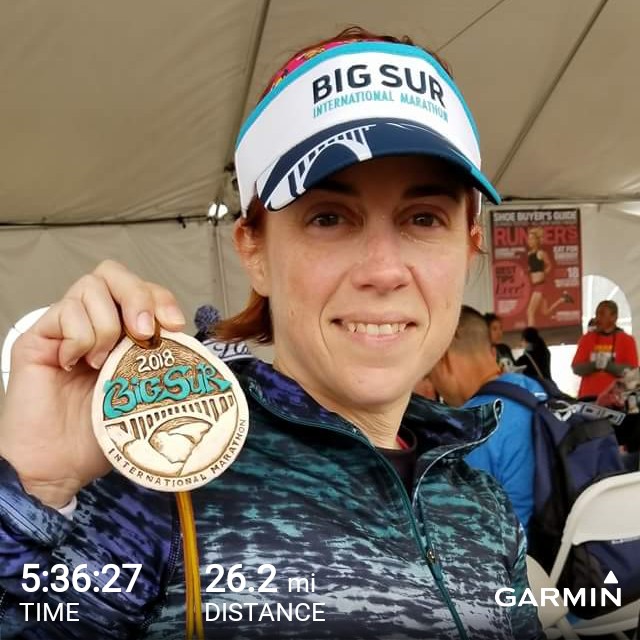 My second marathon was on May 20, 2018. It took place in Sugarloaf, ME. The reason I was running this had to do with my coach. Lynn Gray was planning for this to be her final marathon. It's the reason she trained with me and my friend Kevin McDonald was doing this as his first marathon. Clearly committing to running a second marathon before I had even run one was a gamble, but I thought it made sense and I knew I'd be trained. As time went on in our training months, Lynn would often tell me that Big Sur was my training run for Sugarloaf. I got what she meant. I knew I wouldn't run the full distance until I was in Big Sur, but I didn't really get what it all meant until I actually did it.

Unfortunately one week prior to this marathon Lynn fell and fractured her hip, so she dropped out of the race and so did a few others from our group who were planned to attend. As upsetting as this was, I knew we needed to carry on and run in Lynn's honor. Lynn was very happy to see us push on and represent the club.

This race was vastly different from Big Sur. It was a real runner's race. We saw so many people with Boston jackets on as many were coming out in hopes of getting a BQ! It was an unusual day. We were not able to get a clear read on what the weather was going to be. High chances for rain and cool conditions was what we prepared for. Despite the forecasted rain chances, we were lucky to not have rain the entire time. It did help to keep us cool during the entire marathon, so that was a positive.

For this race, I decided I would not take any pictures. I really wanted to shave off a lot of time in the race to get closer to my goal of 5 hours. Little did I know that some things would happen at the end of the race that pushed me to go even faster. First off I fully expected to be the last person in my group to make it to the finish. This is how I went into the race, so when I got to mile 22 and saw my friends I was shocked. I hadn't seen them the entire race. Kevin was just ahead of me doing a combination of walking and running - I knew something was off. When I finally caught up to him he shared with me that both his legs had started cramping mid way into the race. He was calm about it and kept pushing on. He told me to go ahead. Next I came up by Jessica and Jen, they had started the race an hour early as they planned to do a walk run combo throughout the entire race. Despite that, I still never expected to see them until the finish. Jessica yelled at me to go for it. She said you are so close, you can make your goal. Before I could even think I had picked up the pace running as fast as my feet could muster in those final miles. I finished the race in 5 hours and 15 minutes, this was 21 minutes faster than my time from Big Sur. Without that encouragement right there at the end I am not sure if I would have had such a huge time gain.

I am beyond grateful for everyone who supported me and know now that you always have to expect the unexpected in the marathon distance. Sometimes it can bring you challenges and other times it can bring you joy -- either way -- there is more inside of you that you can pull from to push there. This is the epitome of what I adore about running. Perseverance!

Kevin really captured the spirit of perseverance on this day, pushing on with cramped legs for the 2nd half of the race. I don't know how he did it, but I do know this says a lot about his character to never give up, while it may not be the result he expected to end up with on race day, he kept on going and to me that is so much more meaningful than any time clock will ever capture. In all, these were two amazing races that have shown me once again that I am capable of so much more than I ever knew. Through the training process too, my friendships with both Lynn and Kevin were taken to a new level. I feel so fortunate and grateful to be part of such a great running club. This is my running family! 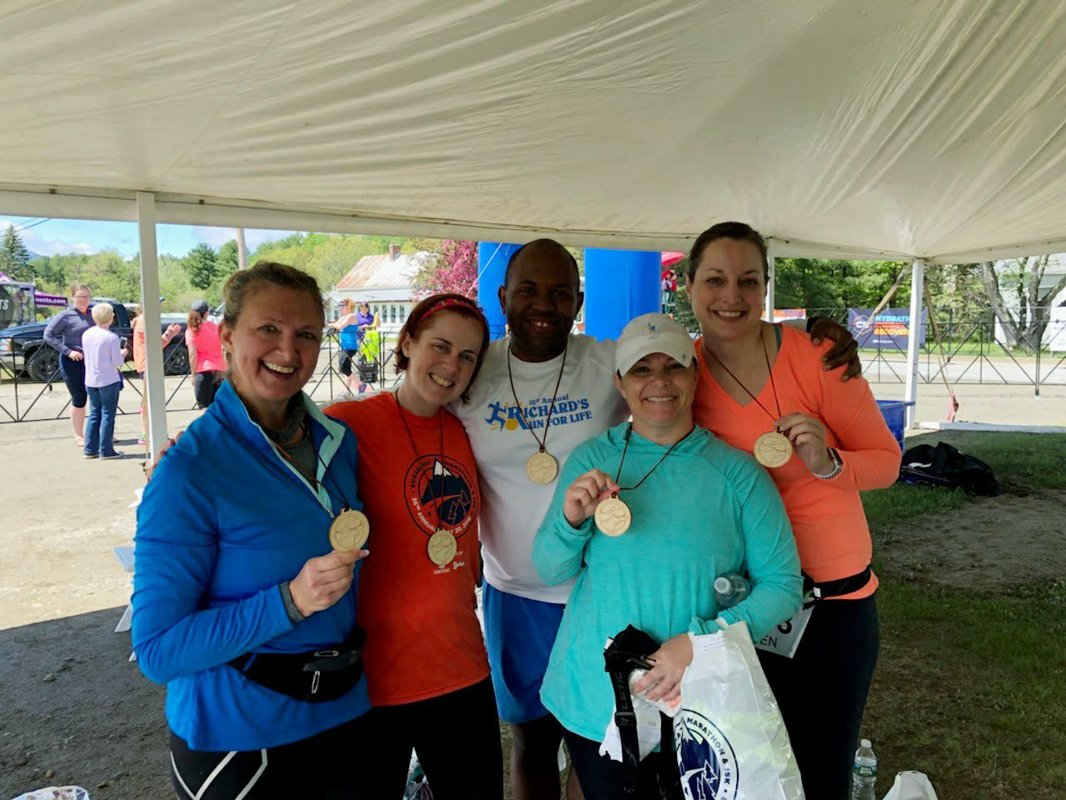 Lynn Gray is an RRCA Coach and runs the TTFS Club in the Tampa Bay area. I am fortunate to be part of this club & am now the acting Travel Director who will be helping to coordinate destination races for the group. For more information on Lynn's programs be sure to check out her site!

Created with Mozello - the world's easiest to use website builder.
.